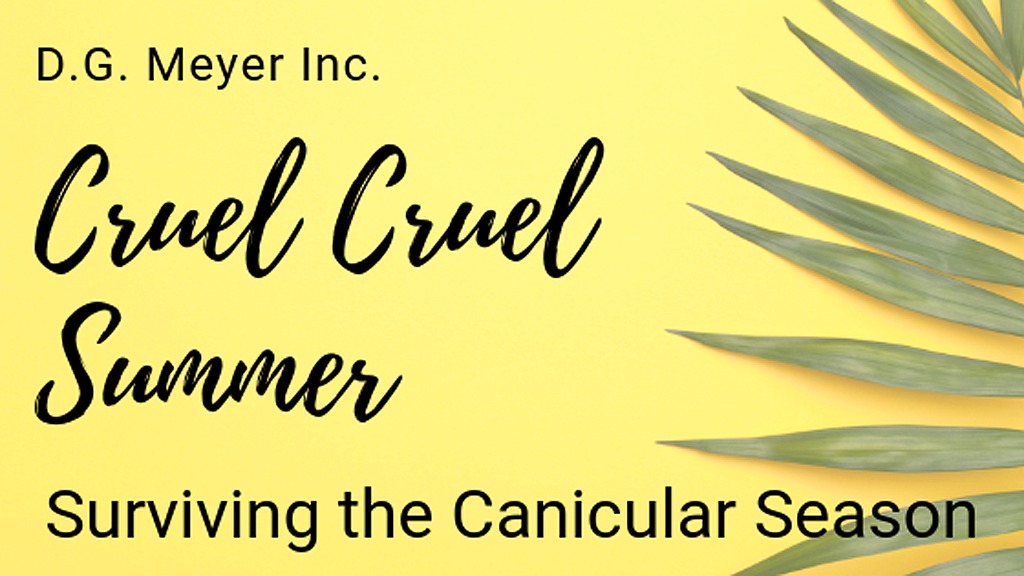 Hot summer streets ~ And the pavements are burning

I sit around ~ Trying to smile

But the air is so heavy and…This heat has got right out of hand.

From “Cruel Summer”  by Steve Jolley, Tony Swain and Bananarama

Living Through the Dog Days of Summer...Again

Canicular– of or relating to the period between early July and early September when hot weather occurs in the northern hemisphere. The Latin word canicula, meaning “small dog,” is the diminutive form of canis, source of the English word canine. Canicula was also the name for Sirius, the star that represents the Hound of the hunter Orion in the constellation named for that Roman mythological figure. Because the first visible rising of Sirius occurs during the summer—the hot sultry days that occur from early July to early September came to be called dies caniculares, or as we know them in English, “the dog days.”

The Greeks and Romans defined  the “dog days”  as occurring around the day when Sirius appeared to rise just before the sun.  Because Sirius is so bright,  the ancients believed it actually gave off heat, adding to the Sun’s summer warmth. Since this took place in late July and into August, these days fell at the hottest time of the year, an interlude that, according to the Greek’s and Roman’s astrological system, brought heat, drought, storms, lethargy and fever, mad dogs and bad luck!

The term “Dog Days of Summer” came to mean the 20 days before and 20 days after this alignment of Sirius with the Sun —presently July 3rd to Aug 11th in the northern hemisphere. Though the origins of the phrase and its original meaning have adapted and evolved through the years, the connotations remain essentially the same.

What To Do When Temperatures Rise!

Well, maybe it is a lot hot!

Here in Florida, our Dog Days tend to extend into a much longer than 40 day period. We can expect this oppressive heat to last through most of September at least.  Floridians have nothing to look forward to but more hot weather until at least mid-fall. With the worst of the heat and humidity still to come, its a good time to take to take measures to make the most of  our cooling systems during the Summer. This is the busiest season for HVAC maintenance technicians in Florida, so keep in mind that if your system fails or malfunctions, it may take longer to get service. Good practices on your part can save you much inconvenience and expense.

Power bills soar along with the summer temperatures, and utilities are stretched, attempting to provide sufficient energy to meet the increased demands. It’s  definitely time to look at our energy usage and what we can expect from our cooling systems this Summer.

You Have Tried It All And It's Still Hot

Keeping in mind the limitations of your Air Conditioning and the outdoor temperature, if you feel that your unit is not functioning effectively, call us at D.G. Meyer, Inc. (386-253-7774)  or Contact our Service Department for an appointment. This is a very busy time of year for us, but we are available 24/7 and will get to you as quickly as is possible.

While you wait for service on your Air Conditioning, or in the event that you are forced to work or spend an extended amount of time in the summer heat, be mindful of the physical toll the heat can take on the body. Heat related illnesses (hyperthermia), most commonly heat-exhaustion or heat-stroke, claim the lives of about 650 people a year in this country.  Since these illlnesses commonly go unreported, there is no real way to know just how many people do succumb to the heat each year.

There are several common sense precautions everyone should heed during a heat wave:

This information courtesy of  cdc.gov

We at DGM hope that your “Dog Days” are pleasant ones…

Let us know what you think! Cancel reply